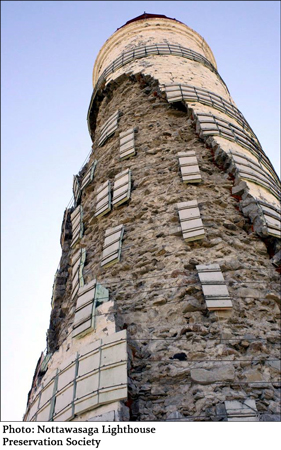 If you’ve spent any time in the Collingwood – Blue Mountain area, you’ve most certainly seen and heard about the Nottawasaga Lighthouse. This piece of our heritage is located on a small island that is now a bird sanctuary to thousands of seagulls. A condo development is named after it and now, the Lighthouse is the subject of intense interest as it is crumbling and at risk of being lost forever.

Built in 1858, the lighthouse is 95 feet tall and ceased operations in 2003. It is relatively inaccessible because of the birds and low lying island but you can feel like you’ve been there: just watch this remarkable drone video.

A group called the Nottawasaga Lighthouse Preservation Society has formed and is fighting hard to raise the necessary funds to restore the lighthouse. I hope the video moves you, as it did me, to consider contributing a donation or volunteer skills to this worthy cause.